The German Constitutional Court recently issued a landmark ruling that climate protection measures must be implemented today to protect the freedoms of future generations. In the Netherlands, Shell was forced by the courts to curb its production because of overriding climate protection interests. In France, companies are being sued for compliance with their duty of care with regard to climate protection. Not only thousands of young people on the streets but also the courts are demanding that politics and business adhere to the Paris Agreement. Alt- hough they are taking on an important control and corrective function, it is time for the Member States’ and European politics to take the reins of action again. With the „Fit for 55“ package, we have now an opportunity to put our continent on a course towards climate neutrality that preserves the freedom of future generations and does not force them into radical abstinence. 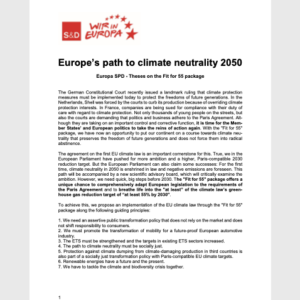